Now and again, the act of traveling demands one to be courageous. However, one aspect of traveling requires much more bravery than all the others and that is eating.

Food is a one of the best ways to experience a new culture but oftentimes, the selection we’re presented with may go beyond our realm of familiarity. Both a blessing and a curse, my unrelenting curiosity pushes me to disregard all fear in order to partake in all that may be considered exotic, strange, and downright bizarre. Here is a list of delicacies I’ve sampled during my travels!

Sorry in advance to all my animal lover readers out there! My food predilections tend to be very adventurous so some of these items are not for the faint of heart!

Though it is considered a taboo food in many cultures, Horse meat is still eaten in Iceland and with great ferocity. It is quite tender and slightly sweet.

Location OSUSHI The Train, Rejkyavik Preparation Raw and thinly sliced Taste Light and nectarous Verdict Of all places, I ate horse at a conveyor belt sushi restaurant. It came riding by on the belt, appearing like beef tartare, although with a deeper reddish hue. It was so delicate that it actually melted in my mouth, but my heart would not let me attempt a second nibble urging me it was morally reprehensible. ‘Balut’ is quintessentially Filipino. Hailed ‘the streetfood king’, it is a fertilized duck egg that is boiled and eaten right before full maturation, meaning the embroyo is still present in the shell.

Location Manila Preparation Warm and Salted Taste Like a highly textured hard-boiled egg Verdict As a kid, I was very fond of balut. However in recent years, after sipping the broth encasing the duck, I can’t get past the soft crunch of bones and baby feathers on my tongue. It’s definitely a mind-over-matter moment. 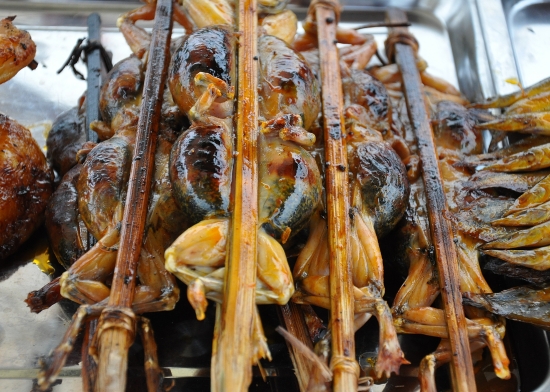 While the French labeled frogs as ‘haute cuisine’, it is a treat enjoyed around the world, especially in Asia. The popularity of eating frogs in Malaysia is on the rise. The most common kind of frog eaten is the American Bullfrog.

Location Jalan Alor Preparation Deep-fried and skewered Taste Like a sadder version of chicken Verdict The woman at the cart insisted it would be delightful but really, don’t bother. If you must, ask for a side of sauce to give it some flavor.

Iceland has the world’s largest puffin breeding colony and has been a staple dish since the time of the Vikings. I unfortunately failed to realize that the species’ numbers have been decling rapidly so morally, I feel quite horrible.

Location Fiskmarkadurinn (The Fish Market), Rejkyavik Preparation Grounded and pattied Taste A juicy, bite-sized burger Verdict Dining in Iceland is a subject of controvery where activists declare exotic meats are only in demand due to the tourists who flock there. On top of being locals-certified, When researching the resturant, they promised that only local, ethically-obtained ingredients were used thus pacifying my troubled morality.

‘Sannakji’ 낙지 is a small octopus, served as bite-sized pieces or whole, and lightly seasoned with sesame oil. It arrives as a plate of squirming, chopped tentacles and meant to be consumed raw.

Location Daejeon Preparation Raw and writhing Taste Alarmingly chewy, but super fresh Verdict Suprisingly satisfying once you get past the initial shock factor, especially when paired with ginger-soy dipping sauce. Its made-to-order and you can watch its preparation/execution. Just remember that this meal poses as a choking hazard because of those active suction cups SO CHEW WISELY!

‘Pastilla’ is traditional Moroccan dish served usually as an appetizer. A filling of shredded young pigeons is wrapped in crisp layers of a phyllo-like dough and slowly baked as a pie. As a finishing touch, the pie is dusted with almonds, confectionery sugar, and cinnamon.

Location Marrakesh Preparation Baked like a meat pie Taste Sweet and savory Verdict My contempt of pigeons prevented me from fully enjoying this meal, but it was incontestably the best thing I ate in Morocco. I craved the sweetness paired the perfectly seasoned meat. The sugar on top adds a honeyed effect to the outer crust. Claimed to be the ‘next alternative meat’ by some gourmands, Kangaroo is a low-fat, source of protein and sustainable alternative to beef feasted on by the indigenous community for thousands of years.

Location Dans Le Noir NYC Preparation N/A (it was pitch-black) Taste Salty beyond compare Verdict I’m unsure if the meat regularly tastes like that or if it was the way it was prepared, but it was so oversalted that I want to avoid any future encounters with this animal!

Most crocodiles in Thailand are outsourced from neighboring Cambodia which features this reptile on many of their menus. Most meat comes from the tail.

Location Banzaan Market, Phuket Preparation Marinated and sandwiches between grilled veggies Taste Like a chicken that overdosed on muscle relaxant Verdict Despite being revolted by the though of eating a crocodile, it was undeniably the most tender piece of meat I’ve ever bitten into in my whole life. A must-try if you can get past the fear factor.

In the realm of the Andes, the Alpaca (a relative of the Llama) is an excellent source of protein, producing meat that is a leaner and gamier version of beef.

Location Aguas Calientes Preparation Slab of meat cooked with white wine sauce Taste Like a regular beef steak Verdict Nothing special, though helpful energy-wise for a trek around Machu Picchu.

To more adventures around the table!

Tell me, what’s the weirdest thing you’ve tried? Anything you want to see me eat? A Taste of Myanmar: Burmese Cooking Class in Nyaungshwe