Beyond the War Remnants Museum and The Reunification Palace, a visit to the Cu Chi Tunnels affords tourists a more hands-on way to experience the devastating war that took place in Vietnam over 40 years ago. A front door pick up!

Bright and early, at 7 am, the Onetrip guides from Team Christina’s came to pick up my two friends and me from my apartment.

He pointed to the three motorcycles next to us. HOLY MOLY. A trip to the Cu Chi via motorcycles! No wonder it was called the Cu Chi Adventure! I don’t know how that fact slipped by me but when I had booked this trip, it was at the behest of my two friends, Julie and Gavin, who were in town visiting. I wearily agreed to join the trip as it was Julie’s birthday that day and I wanted to maximize our time together. But a few months back, when I first arrived to HCMC, I did a half-day trip to the Cu Chi Tunnels that left me seriously disenchanted: all I remember was the gimmicky shooting range where AK-47s roared loudly and a goofy guide who claimed he was the ONLY survivor of the war. I was hoping to understand the war better but all I got out of the day was the romanticization of a gruesome war that laid waste on the land and its people. Julie and her awesome guide Ben

Our guides Tri, Ben, and Binh presented us with these cool ethnic printed headbands that would later double as masks to filter out the pollution on the road. We then set off for our first destination: Bánh Mì Hà Nội breakfast . An hour later, we were on the boundaries of District 12 and soon entering the suburban district of Hóc Môn. Tri stopped to get me some com tam (broken rice) when I informed him of my gluten sensitivity. Dietary restrictions accommodated for the win! About 15 minutes later, we were at Dương Cầm Coffee Shop regrouping with my friends and meeting the rest of the entourage. Devika from NYC, a Malaysian couple named Michelle and Sam, and Grady, a Californian based in HCMC, completed our 7-person strong team. After our hearty breakfast of cafe sua da (iced coffee), banh mi, and the best dragon fruit I’ve ever tasted, we continued on. The gang’s all here!

Our motorcade breezed through near empty streets, with the sun beating down on us. Luckily, Team Onetrip had all their bases covered and gave us sunscreen. The next stop was a field full of rice noodle sheets drying out in the heat of the sun on makeshift bamboo racks. We walked out into the fields to admire the handmade process up close. One of the guides ripped tiny pieces of rice paper and fed it to us. It had this slight acidic bite to it and quite chewy. We crossed the street to the one room noodle factory that would later process these sheets of rice paper into hủ tiếu (thin rice noodle,) the most common noodle dish eaten in Southern Vietnam. The factory was pretty meager but demonstrated the industriousness of the Vietnamese. I was definitely impressed! No preservatives added, all natural!

After our noodle stop, the guides went off-roading, rerouting the journey through the countryside. The dirt path followed a small stream that snaked through paddy fields. Conscientious of the heat and of our bums getting sore, we took a “butt-break” at a cafe, chilling out on the hammocks. A glass of passion fruit juice and plates of chopped guava paired with a chili/salt/sugar dip kept my hunger at bay. By now, it was already 11 am. We had one more stop before reaching Cu Chi and that was the rubber plantation. Thin trees lined up in rows alerted us we had arrived. Strapped onto the trunk were wooden collection bowls. One of the guides, Hieu, cut into the tree with his pocket knife. From the puncture, we could see the white sap oozing out, natural latex used to produce rubber. I placed my hand in the milky substance, which basically had the consistency of glue. After some historical background, we departed with more trivia about Vietnam than we possibly ever expected. Gettin’ ready to do some exploring!

It was now time for the tunnels. Thirty minutes later, we had arrived at Ben Duoc. It’s kind of crazy to think that the Cu Chi District still technically belongs to Ho Chi Minh City. A 70-km drive out of the city, Ben Duoc is one of the two tunnel entrances. Most tourists are brought to Ben Dinh because of its closer proximity to Saigon and its reconstructed tunnels that have been enlarged to accommodate visitors bigger in size. While Ben Duoc is further away, traveling the extra kilometers awards the visitor almost an exclusive experience and access to the original tunnel system; this is where the Vietnamese actually go to pay respect to the veterans during the national holidays. When we arrived, only one other party was there. The sites are installed with historical displays including a collection of artillery used in the Vietnam War, known as the American War of Aggression by the Vietnamese. B-52 craters shape the terrain. Mannequins and animatronic figures dressed in Viet Cong uniforms previewed life in the past. It’s obvious how much of an investment the government has made preserving the tunnels. As we walked through the tree-covered area, our guides were fast to remark:

“These trees were planted by the government because after the devastation, there wasn’t a tree in sight!” 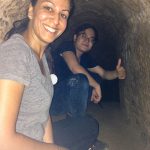 Our new friend Devika from NYC and Long, one of the dope guides over at OneTrip 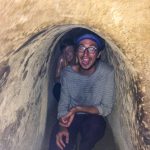 Gavin and Julie relishing in the heat… NOT!

Read More  16 Books By Filipina Authors You Should Read

After a quick look at a propaganda video, we were on our way to exploring the tunnels. Our guides, all history buffs, took turns sharing facts about Cu Chi. We were then asked to find the entrance to the tunnels. While people scoured the horizon, one of the dudes, Long, bent down and unearthed a secret door in the ground, hidden by leaves. The rectangular hole was basically the size of shoebox! Long sat down, raised his arms, and disappeared into the expanse. All the rest of us were hesitant to follow, fearful that we’d get stuck but in the end, after much persuasion, one-by-one vanished down below. The hole led into a tiny tunnel, made of dirt. The Viet Cong had dug all these tunnels by hand using crude hand tools. It was impossible not to get dirty. Crouched in squat position, six of us made our way down the tunnel shimmying more so than crawling. The bunker was tinyyyy and super musty but it had a well inside of it!

A light to our left beckoned us to the exit. Immediately, we made our way out feeling accomplished. “Now that was Level 1.” Level 1. Ten meters long. Two more challenges were awaiting us. Level 2, about 20 meters, sunk deeper into the earth. You basically slide down a bit before making your descent to an underground bunker. We all were amazed at the size of the bunker, outfitted with a tiny light bulb. In the left was a well, showing us a small example of how the Viet Cong managed to survive down there. Making our way out, we complained of soreness in our legs, laughing how out of shape we all were to be doing such “strenuous” exercising. Ready to make the 2 hour trip BACK to HCMC… lucky I had a seat back to lean on!

The last installment of our tunnel escapades was either a 30-meter or 50-meter route. We went with the latter. The tunnels, having no light, meant that cellphone flashlights had to be switched on. As we crouched through the low-lying tunnels, our hot breaths filled the tunnels. It was no secret how difficult life must have been down below for the Viet Cong, even with basic amenities at their disposal. An estimated 45,000 Vietnamese men and women died defending this region. The exit to the 50-meter tunnel was the hardest to exit out of. Basically, the tunnel abruptly stopped to a seemingly tiny hole and you had to essentially wiggle your way into the hole and then prop yourself up to get through the exit. But high fives were waiting for us at the end. The guides then directed us to a water fountain to rinse up and then we proceeded to munch on cut up cassava, the central starch that formed the diet of the Viet Cong during the war. By now, all our stomachs were grumbling. 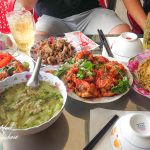 My favorite item on the menu was the pork stuffed tofu with tomato sauce! Oh my word! 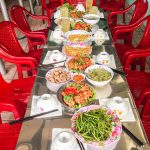 The feast at Auntie 7

There is also a shooting range at Ben Duoc located near the exit but we were all too hungry to focus on anything else. The lunch point, Gì 7 meaning “Aunty Seven,” was only 15 minutes away thankfully and it was probably one of the best meals I had in my life. About 7 dishes were laid out with bowls of hot rice. Tofu stuffed with pork, sauteed morning glory with garlic, VFC (short for Vietnamese Fried Chicken) were some of the meals we enjoyed. Lunch was eaten in complete silence. The only interruption was due to the arrival of a cake for Julie’s birthday that Tri had called ahead to prepare. It was the absolute sweetest gesture! The meal came to a close and we all set forth back to the city, eyes heavy bellies full. Hitting a bit of traffic, we reached the city at 5 pm. The day was long but my spirits were still high.

Disclaimer: I was a guest of Christina’s Vietnam, but all opinions, as always, are my own.

👉 Have you ever been to the Cu Chi Tunnels? What were your opinions of it? Do you have a place for me to discover? Comment below!