For those looking to experience street art in Penang at its best, this self-guided walking tour has all the bases covered—and still allows for some exploring.

In league with the likes of Miami and Berlin, Penang is a recognized street art capital of the world. I prioritized a trip to Penang primarily for the street art and needless to say, the street art met every expectation. As a street art enthusiast, a weekend was not enough to do a thorough enough reconnaissance, and the amount of artwork that exists in George Town alone is overwhelming. If you have the time to explore—great! If not, here is a detailed breakdown of what you will find, and where you will find street art in Penang.

A Map of Street Art in Penang Here is a printable of the walking tour for reference. The “I Want Bao” mural adorns the front of the Ming Xiang Tai Pastry Shop. The artist, WK Setor, was invited to pain the piece for the pastry owner. Apparently, the two children are none other than the pastry owner’s children!

The History of Street Art in Penang

Don’t be fooled by the faded wash of murals splashed across decrepit walls. Street art in Penang is a less-than-a-decade old phenomenon that owes its existence to forward-thinking city officials, as much as it does to the creative ingenuity. In 2008, the historical core of George Town, Penang’s capital, was awarded a World Heritage Site title by UNESCO. In an effort to rally a campaign around the new title and forge a distinct identity, the Penang State Government hosted a competition called “Making George Town” calling for creative ways to make use of public spaces. The Kuala Lumpur-based firm “Sculpture At Work” won the bid and crafted a hefty 52 iron rod sculptures illustrating long forgotten anecdotes of the streets of Penang that now, mark the storied roads of Penang. It wasn’t long before Lithuanian born artist, Ernest Zacharevic, was tapped to paint full-scale muralwork for the  George Town Festival 2012. The six commissioned murals he dreamt up are inspired by the everyday humans of Penang, capturing the lively spirit of the city through mischievous scenes. The iconic mural of the batch, “Little Children on the Bike,” singlehandedly put Penang on the map as tourists flocked to the site to be a joyride passenger along with two perky youngsters. Most of Zacharevic’s pieces are interactive, having components in which the art interacts with real elements –eg. a painted boy riding on the back of a decommissioned motorcycle. His work is a fascinating depiction of art merging with the environment.

Pro-tip: When standing in line for the “Little Children on the Bike” mural, start at the end closest to the seat. That’s where the line “technically starts” and you’ll get a turn on the bike much quicker.

The mural that launched 1000 tourists

Update: Don’t look for the “Two Children in a Boat” at Chew Jetty. According to a few locals I asked, it has been neglected and worn away due to lack of upkeep. Personally, I’m not a huge fan of animals, but strangely enough, I really love animal motifs and cat-themed art is something I get down with. Extra brownie points goes to “artivism”, art done in the name of a good cause! The “101 Lost Kittens Project” is an initiative championed by Artists for Stray Animals (ASA) to help raise awareness and curb high stray populations in Penang. Most of these murals are found on the second half of Lebuh Armenian (Armenian Street) past the Beach Street intersection. Each of the murals painted in this collection highlight a positive and/or point of concern regarding stray felines. The one below is called “I Can Help Catch Rats,” meant to encourage locals to keep cats as pets to help with pest control.

Read More  Top Five Things To Do in Bhaktapur, Nepal While the heaviest concentration of these murals are in the confines of George Town, the popularity of street art in Penang has spread passed the boundaries of the historic center and now exists in every nook and cranny. You’ll see illustrations of flying cats painted on window shades, sketched women lighting incense down alleyways, murals decorating the sides of warehouses and across the archways that mark Penang’s famous five-foot ways. This motivates those looking around to stay attentive, while in the same vein, offers a wealth of surprises. And the prominence of street art in Penang is something to note because Penang was the only Asian destination out of 42 cities featured in Lonely Planet’s latest coffee table book, Street Art. My best advice is to cherish the wandering and take the time to meander down every little lane. Staying present is key to enjoying your street art scavenger hunt in Penang. Where? This colorful entry looks over the famous “Penang Road Famous Teochew Chendul” on Jalan Penang, where the stand sells the same exact treat the boy is indulging in the artpiece. 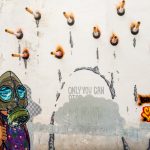 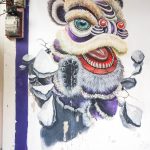 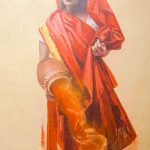 Check out this Interactive Walking Guide

👉 What’s a mural you absolutely want to see? Do you have any other street artwork that I should add to the list? Let me know in the comments below and don’t forget to explore more!