Top Five Things to Do in Medellín, Colombia

Presenting things to do in Medellín, Colombia according to Daniel of Destinationless Travel.

Medellín is a city in Colombia, known all around the world because of one man – Pablo Escobar. However, Colombia is a changing country, becoming increasingly safer each day and Medellín is the city leading these changes. Remarked as the world’s most ideal temperature all year around (about 64 to 83 degrees Fahrenheit) and some of the friendliest people I have ever met, Medellín is quickly becoming a top tourist destination for people heading to South America. Colombians are typically ecstatic to leave behind their dark past and work towards improving the reputation of the gorgeous country with lots to offer tourists. Medellín is Colombia’s second largest city, so naturally there is a lot of things to do! It was extremely hard to narrow down to my top 5 (especially after spending two weeks there) but I have done it and here are the winners.

Interested in visiting Colombia? Check out my first timer’s guide to Colombia. Latin Americans are known to be football (AKA: Soccer) fanatics, and in Medellín, this is certainly true! Imagine a stadium packed with thousands of passionate fans chanting for 90 minutes without a break—the ground literally shakes! From the moment I entered the stadium, the atmosphere was electric. Football lover or not, I promise this night will be one nobody could forget. The idea of getting to the stadium on one’s on and hunting down a ticket is a bit daunting, so luckily there are tours that take groups of tourists to and from the game, provide tickets, and some peace and mind knowing a local guide is leading the group. Football Tours Medellín is the company I went with and all up we were a group of about 20 strong – all wearing our jerseys and chanting as much as the locals! The crazy fans at the west end! Photo by Daniel Caracciolo.

2. Have a Night out in Poblado

This area of Medellín is literally filled with cool bars and amazing restaurants – no trip to Medellín would be complete without a night out here! When I first arrived in this area I was shocked. It wasn’t what I imagined Medellín to look like.

Read More  Top Five Things To Do in London, England
Poblado is an upscale neighborhood in Medellín and it is the most common area for tourists to stay, boasting incredible places to visit, clean parks, and a high police presence making it incredibly safe. The locals who live here are very proud of their neighborhood and will want to share some beers with any tourists hanging around the local bars! Seeing this place showed me how far Colombia had come in such a short amount of time and how bright its future really is!

It was almost impossible to pick a place to eat but I did find a local secret called Cafe Zorba. It’s the best pizza I’ve ever eaten, so check it out! Poblado is so beautiful at night! Photo by Daniel Caracciolo. The best pizza is at Cafe Zorba. Photo by Daniel Caracciolo.

This part of town, known as Comuna 13, is where there is the most incredible graffiti art. From murals that outline political problems to just simply crazy art work, it was definitely well worth checking out. I did a tour to this area and I believe it is the best way as then I could learn about the artists themselves and the meaning behind the murals painted. The area is also very charming however it wasn’t always the case as Comuna 13 was once the most dangerous part of Medellín! Today, it is rather safe however, I would not recommend going alone or at night. Some of the beautiful murales. Photo by Daniel Caracciolo.

This is the number one thing to do in Medellín for anyone who has a limited amount of time. The tour with Real City Tours is really that good! Usually, I am not much of a “walking tour guy” however, I really enjoyed this particular one. From past to present, I learned so much about the people of Medellín and their history. Just make sure you go with Real City Tours as they are the number one in town! Booking this tour is essential so make sure to plan ahead.

Where? The Real City Tours Office is located at Cra. 51 #41-76, Medellín, Antioquia, Colombia. The lights of hope, visited on the free walking tour. Photo by Daniel Caracciolo.

5. Spend a day or two in Guatape

Beautifully colored buildings line the pebble stone streets, street vendors sell amazing empanadas, and the coffee shops make a great brew. This just might sound like heaven – however it’s actually called Guatape, and it is only located only just over an hour from Medellín.Guatape is a photographer’s dream and a food lover’s paradise. There is something else that brings visitors from all over the world to Guatape: the 3rd largest monolithic rock in the world!

Read More  Top Five Things To Do in Pittsburgh, USA
El Peñón, as it’s called, is said to also have the “world’s best view” (so the locals say). This may not be entirely true but it’s still pretty impressive. Climbing the rock is an easy 740 steps and once at the top it overlooks the lake that surrounds Guatape, it’s definitely a great view! Getting there from Medellín is easy and buses run all day there and back. There are guided tours for the day or take a local bus and do it on your own (and maybe even choose to stay a little longer and spend a night there, like I did!) 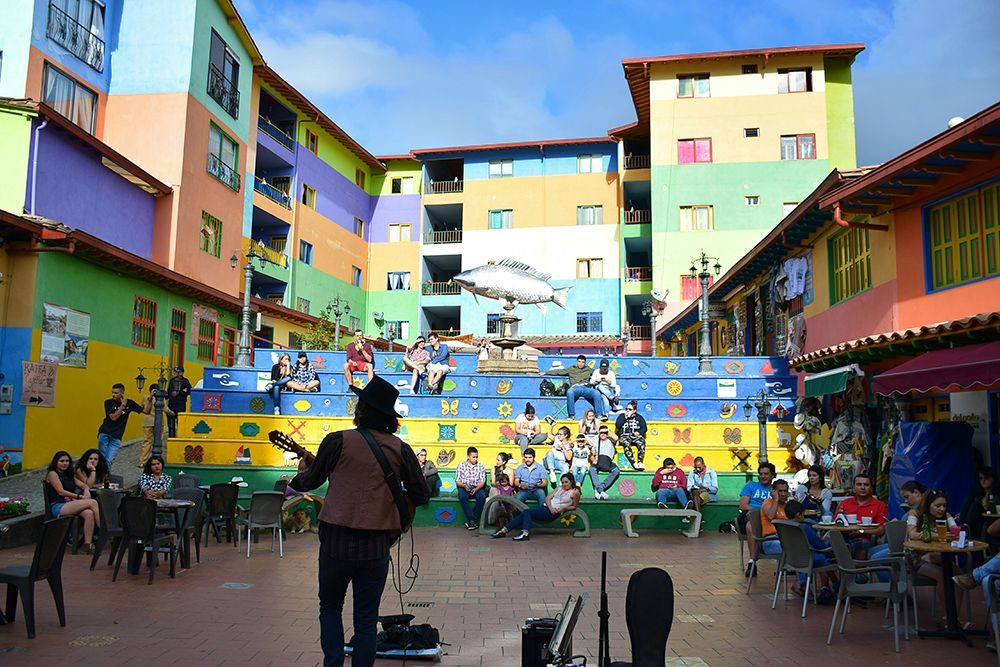 The vibrant colors of Guatape. Photo by Daniel Caracciolo. The view of El Penol from Guatape. Photo by Daniel Caracciolo.

Read More  Top Five Things To Do in Langkawi, Malaysia Daniel Caracciolo is a 25-year old-Australian, full-time traveller, and blogger currently on an adventure in Latin America. Along with his Canadian partner Bailey, the two quit their jobs and are now on a never-ending (hopefully) journey around the world where they share what they’ve learned and loved on their blog Destinationless Travel. They hope to inspire others to travel long-term as well as share the beauty of the world with all of their followers.

👉 Special thanks to Daniel and don’t forget to visit his blog. Have you ever experienced any of these must-dos in Medellín? Comment below!