When the leaves begin to rustle and the air starts to smell *crisp,* that’s when New Englanders know apple picking season has arrived. At a lost for where to go? Look no further than Russell Orchards, the best place for apple picking in Massachusetts.

The Patriots. Pumpkin Spice Lattes. No traffic on I-93 South to Cape Cod. There are few things that get New Englanders as excited, except maybe for apple picking, the quintessential fall sport. What’s so great about apple picking, you ask? The seemingly parochial pastime of apple picking is actually one of New England’s hidden gems. Farms around the region allow guests to “P.Y.O”—”pick-your-own” apples. There are more than 80 apple picking spots in Massachusetts alone, but my personal favorite is Russell Orchards in Ipswich, Massachusetts. The 120-acre family owned and operated fruit farm is the second-most visited apple picking destination in the state, and is also conveniently a 5-minute drive away from Crane Beach, one of the best beaches north of Boston. Open daily from 9am – 6pm in September and October and 9am – 5pm in November. Pickup trucks and pumpkin patches setting the tone for the farmstead frolicking.

When To Go Apple Picking in Massachusetts Apple picking season begins as early as late August and usually goes up until Veteran’s Day weekend (observed annually on November 11th). For those who likes to avoid crowds, Russell Orchards experiences heavy traffic the last weekend of September and almost all of October so a prime time to go is usually early/mid-September. But the season is always dictated by the weather, number of orchard-goers, and the crop yield. If you are looking for specific varieties, you can either call ahead or look at Russell Orchard’s website, which keeps up-to-date records on which apples are out in the orchards. On a weekend, mid-afternoon is normally the busiest time for visits, so if huge families with screaming kids is not your thing, wake up early. What To Wear Apple Picking

On the off chance you are lucky and go apple picking on a hot and sunny day like my friends and I did last year, go ahead and rock those shorts and breezy blouses. A non-negotiable is wearing comfortable shoes you don’t mind getting scuffed up. I learned my lesson when I wore new boots out picking and they came back all scratched up and dusty. Also, if the line for the hayride is too long, you can easily walk to the orchards without worrying about your poor feet. For actual attire, comfy flannels and long denim are sensible choices as they not only will keep you warm, but also prevent your shoulders/arms/legs from getting scratched up as you push your way past branches. Heading out on a cooler day? Layer like a pro by putting a tank underneath and grabbing a scarf and a beanie. If your fall uniform involves chunky knit sweaters, it might be better to leave those at home as loose yarn is prone to snagging. This is the perfect time to rock a turtleneck. And don’t forget sunglasses! You don’t want the sun shining in your eyes as you scope out the perfect tree.

How Does Apple Picking Work?

Apple picking is a social event. On the weekends, the entry is $20 cash for one peck bag and can be shared between four people max. I always like going with friends because we usually split a peck bag. If you end up going as a party of 5, they will make you pay for two bags so just be warned. For sizing purposes, 1 peck bag (normally 10 lbs) is 1/4th of a bushel. And 2 lbs of apples usually makes one apple pie. For more information on how to use the apples you pick, I’ve created a handy infographic down below based on Russell Orchards’ apple data (see How to Use Your Apples).

If you drive to Russell Orchards, parking is free. From the parking lot, follow the signs towards the main barn, which doubles as the gift shop and bakery. Walk 100 yards past the barn and you should see the line forming for the tractor ride to the orchards. If the line is too long, you can also get to the field by way of a walking trail, which takes less than ten minutes. From my experience, you usually pay for your bags at the orchard. There will be a farmer’s stand at the entrance of the orchards and remember, it’s cash only. Handy signage to know exactly what you’re looking for.

There are eight varieties of apple to choose from at Russell Orchards during the season: McIntosh, Honeycrisp, Gala, Cortland, Empire, Jonagold, Macoun, and Gingergold. Depending on the time of the year, some varieties might not be ripe yet. In mid-September of last year, Galas and Macouns were the most abundant crop. For fresh off-the-tree apple eating, you can’t go wrong with Galas, Honeycrips, and Gingergold. After you pick an apple off the tree, just rub it on your denim pants until it’s shiny and voilà, it’s ready to eat!

There’s also a “right way” to pick apples from a tree, as to not damage the other fruit. Hold a ripe apple with your whole palm and twist it until the stem snaps off from the branch. If you simply pluck the apple off the tree, you’ll not only bruise the skin but also cause other apples to drop from the tree. There’s nothing that’s more irritating for visitors later in the season to see a bunch of rotting, damaged apples on the ground. The prettiest apple models you ever did see! The more, the merrier! An interactive, fun way to spend a Saturday afternoon.

You can spend however long you’d like apple picking. If the orchard is experiencing heavy foot traffic, then chances are it might take you a little longer to fill your bag. Towards the later end of the season, most of the trees are already barren and you’re left scrounging around for low-hanging fruit. On average, I spend about 2-2.5 hours at Russell Orchards and try to go at least once every fall time. Last year, I took a field trip with my coworkers and even brought along some friends from The Netherlands and Finland, first timers to apple picking in Massachusetts and they easily ranked it one of the best things they did during their time living in Boston.

For things to do in Boston, check out the City Guide: Boston. How to Use Your Apples

Have a ton of apples and don’t know what to do with them? Check the chart to see just how many yummy methods there are to keep the doctor away! Not feeling proverbially innovative in the kitchen? Feel free to pick up some ready-to-eat caramel apple wraps in the gift shop for some easy snacking. There were more than enough apples for everyone by the end of the day.

Beyond Apple Picking: The Gift Shop and Bakery The main barn is also a warehouse for all apple-related paraphernalia. Ranging from practical cookbooks and rolling pins to the more absurd table top apple peelers, there’s something for everybody. And they also carry a lot of locally-produced goods like soaps and fresh preserves from nearby Salem and Rockport, which make for perfect housewarming gifts. Upholding the “Zero Food Miles” pledge, all the produce on shelf is actually grown right on the farm (with the exception of sweet corn, squash, and pumpkins). I’m a huge sucker for honey sticks and always buy a bundle of ten every chance I get. For wine enthusiasts, you can also sample four of their limited-edition fruit wines, made from, you guessed it—the fruits from the farm. The wine tasting costs $5 but you get to keep your Russell Orchards mini wine glass as a souvenir.

Tip: Bring extra cash for the gift shop to purchase apple cider donuts, wines, and other goodies. There is an ATM on site. They even have gluten-free donuts! But you can’t/musn’t/shouldn’t leave Russell Orchards without ordering a dozen cider donuts to go. Have you ever tasted a freshly baked cider donut before? Russell Orchards is critically-acclaimed when it comes to their cider donuts. Fried all day long and made from scratch, the Russell Orchards cider donuts are crispy on the outside but moist and chewy on the inside, with notes of apple cider subtly enjoyed in every morsel. Eat your hot donut plain or order some vanilla bean ice cream on the side. If you’re feeling extra festive, wash the doughy goodness with a cup of heated apple cider. Note: hot apple cider also makes for good handwarmers when it’s cold outside. Also at the bakery: order pies in advance and there are some gluten-free items on the menu. 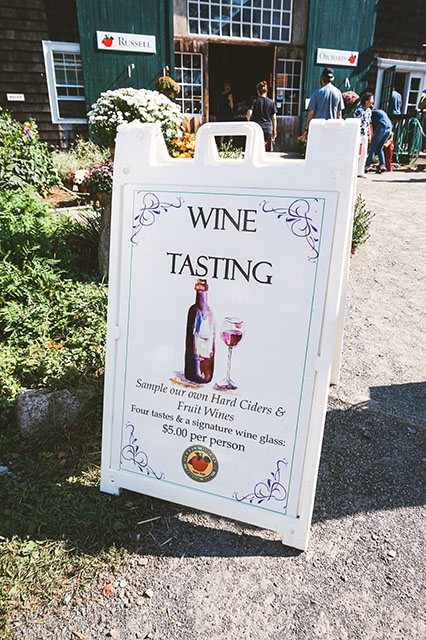 How To Get There From Boston:
Approximately 50 minutes by car. Take Route 95 North to 129 North and exit 20A to Rt 1A North.
Approximately 1 hour and 15 minutes by train. Take the commuter rail line from North Station to Newburyport. Get off at Ipswich Train Station. Take a taxi for the remaining 2.5 miles to Russell Orchards (about a 7 min. drive.)

Time: Open 9am – 6pm daily in September and October and 9am – 5 pm daily in November.

What’s included: A complimentary hayride to and from the orchards.