Top Five Things to Do in Riga, Latvia

A European capital where culture and color collide, Riga is looking to the past to pave the way for its future.

Of the three enchanting Baltic capitals, Riga surpasses its neighbors, Tallinn and Vilnius, in population density. Over 1/3 of Latvia’s population call Riga home and it’s easy to understand why. You can trace a timeline of historic art movements in every facade, from Hanseatic touches to the decorative architecture movement of Jugendstil, more popularly known as Art Nouveau. Tucked away down beguiling side streets are cozy coffee shops, welcoming watering holes, and stunning structures painted in fanciful shades of periwinkle, butterscotch, and salmon. In every corner of the city, you’ll find soulful vocalists channeling their inner Macy Gray and humble accordions sighing melancholic tunes, like the minstrels of yore carrying songs wherever they roamed. Riga’s youth are reviving centuries-old folk traditions, bringing new energy to tired choreography. The Riga I saw very much exemplifies the idea of “New Latvia,” or Latvia post-Soviet occupation. While the prominence of Cyrillic text on most signage might say otherwise, every effort to rid Riga of Russian influence begins with a return to Latvia’s roots.

Special thanks to my friend Martin Millers, a former resident of Riga who gave me all these great tips. 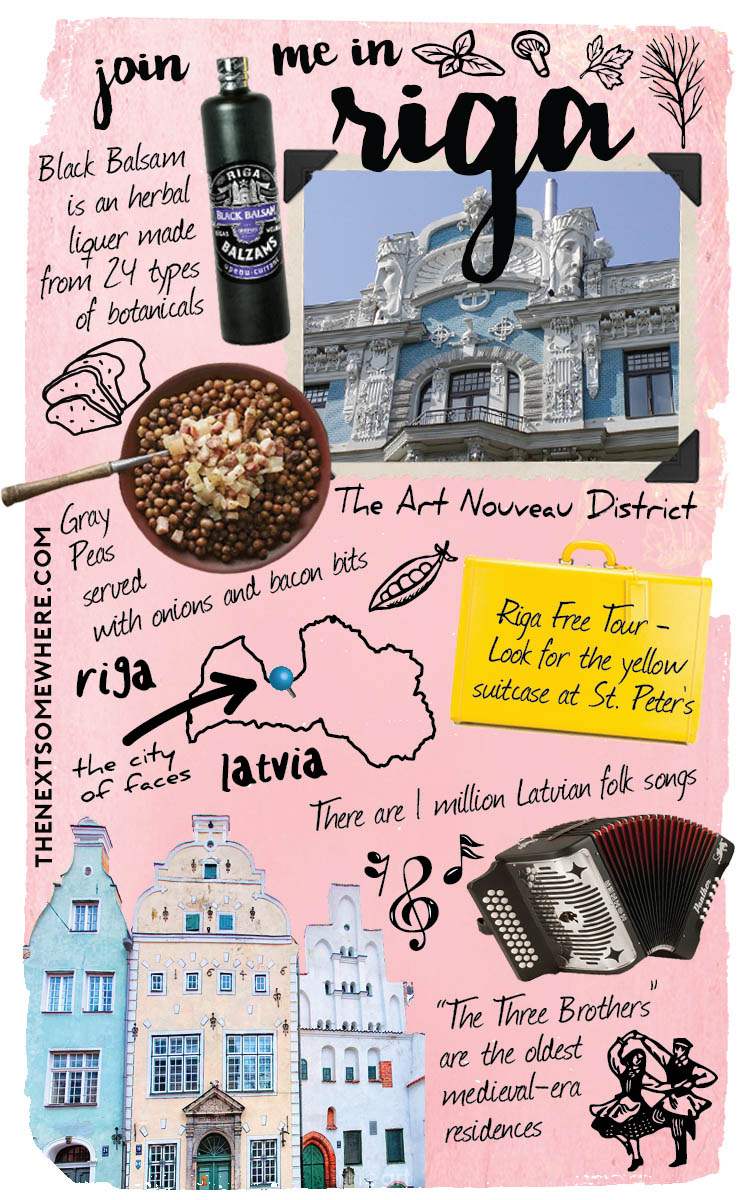 Where? Peldu iela 19, Centra rajons
Tip: If you come a little later, you might have a hard time finding seating. Also, service is quite slow so get the attention of the servers as quickly as possible. Gray peas served in a hollowed out slice of dark rye bread.

For those travelers who just like to wander, Old Riga —known as Vecrīga in Latvian— is one of the most satisfying places to simply get lost. Featuring a motley crew of multicolored buildings from nearly every artistic era in the last century, it’s no surprise that Vecriga holds UNESCO World Heritage status. There are a number of plazas surrounded by restaurants in Vecriga, the sounds of foot traffic to accompany your al fresco meal. In my opinion, the prettiest streets can be found at Tirgoņu iela, Meistaru iela, and Šķūņu iela. Some places of interest to put on your itinerary: Vecriga come sunset. All photos taken by Millette Pulido © The Next Somewhere. One of Riga’s most impressive buildings is the House of the Blackheads built in 1334. 3. Tag Along on a Free Walking Tour

Almost every European country offers a “free” walking tour, operating on a system of pay-as-you-see-fit. Riga is no exception. My friend Martins suggested the Riga Free Tour, a 2.5-3 hour tour that commences promptly at 10am and 12pm daily from the front steps of St. Peter’s Church. Just look for the yellow suitcase. Along the way, you’ll see sights like The Bremen Town Musicians statue , believed to bestow a certain amount of luck to bypassers depending on which animals’ nose you touch; Riga Central Market , an indoor marketplace housed in a complex of refurbished World War I zeppelin hangars; The Latvian Academy of Sciences , also known as “Stalin’s Birthday Cake,” which features one of the very few untouched “sickle-and-hammer” communist symbols in Riga; and The Freedom Monument , a monument erected in 1935 featuring Mother Latvia carrying the three stars, representing the three provinces of Latvia. There’s a lot to learn and each tour guide brings their own unique experiences and insights on their hometown.

Where? The Riga Free Tour meets in front of St. Peter’s Church daily and is only closed on January 1st and June 24th. Our tour guide, Arsony, and his yellow suitcase. At the top of the Freedom Monument is a woman affectionately coined “Milda,” holding up three stars representing the three Latvian provinces.

4. Take in Riga From Above

Riga is already spectacular at ground-level, so imagine the sights when you go the extra [vertical] mile. The most well-known observatory point is the one housed in the St. Peter’s Spire . Ascend in the lift that runs to the top every 10 minutes. From 72 meters/236 feet in the air, you can look out onto Vecriga, with its red brick rooftops, the beautiful Daugava River, and the Central Market. Some downsides: the gallery area is quite small, so only a few people are allowed up at a time, and the view is obstructed by iron bars. Another thing to mention is that the admission fee to is €9 euros, which is a bit pricey for a view. Bring a jacket as it does get very windy up there.

Where? Skārņu iela 19
Hours of Operation: Tuesday through Saturday: 10am – 6pm, Sundays: 12 – 6pm, closed Mondays
Pro-Tip:The Latvian Academy of Sciences offers the same sprawling views of Riga from a circular terrace, called “Panorama Riga,” for only €5 euros, and there are no enclosures to ruin any photo opportunities. A view of Riga to the north of St. Peter’s Church. A view of Riga south of St. Peter’s Church. The Latvian Academy of Sciences has a cheaper view of the city.

5. Stand in Awe of all the Art Nouveau Architecture

There are over 800 Art Nouveau buildings in Riga, making it one of the largest concentrations of this architectural style on par with Berlin, St. Petersburg, Krakow, and Vienna. The Art Nouveau movement is defined by romance, geometry, and chimerical motifs like screaming maidens, magical beasts, and hoofed satyrs. The many visages on display has given Riga its nickname as “The City of Faces.” In the Art Nouveau District , you’ll find the prolific work of architect Mikhail Eisenstein, whose delicately flamboyent masterpieces dominate Alberta iela. For art aficionados, a walk through this open-air art gallery is a must.

Where? Find the most impressive Art Nouveau buildings at the intersection of Elizabetes iela and Brivibas bulvāris and on the corner of Alberta iela where it meets Strelnieku iela. An example of Art Nouveau-style architecture on Strēlnieku iela. Women with mouths agape are some markers of Art Nouveau.

NOTICE: The KGB Building/Corner House has been closed as of September 2018. From what I read, locals found it too painful to keep the building open. You have to come with a playful attitude to the Cosmos Iluziju Museum. When it comes to lodging in Riga, Airbnb is the most affordable and convenient option. But I also learned that Riga is a growing wellness destination, and many Europeans flock to Riga for spa weekends. There are also a number of gorgeous boutique hotels that are not outrageously priced. For solo travelers on a budget, hostels are probably the smartest option but for groups of 2 or more, get an Airbnb.

Cozy Little Apartment in the Heart of Old Riga Out of all our Baltic stays, this is the only location we booked direct in the Old Town. Karlis’ apartment is located right in Vecriga and is a less than 10 minute walk from the local bus station. Karlis is highly responsive and give great tips; in the apartment itself, you will find a basket of travel brochures.  The apartment itself is easy to find and is right on the first floor so no climbing up stairs is necessary. The house is right next to a Hookah and Tea Shop that stays open late, so you can easily find your place at any given time of the day. The apartment is very tiny, but the space is smartly used. The hallway converts into a bathroom and the bed pulls out from under the elevated living room. Granted, there is only one blanket and it gets a bit chilly at night, but Karlis has an electronic heater that you are free to use. It’s a great value for travelers coming in and out of the city. 2 guests max. Whole apartment starts at $36 per night. Our quaint Airbnb hidden down the alleyways of Riga’s historic center. The fully stocked kitchen with both a washing machine and refrigerator.

Neiburgs Hotel (Jauniela 25/27) is a stunning 55-room, family-owned, boutique hotel in the heart of Vecriga. The suites are massive and every room is outfitted with a lounge and built-in kitchen. Stylish and sleek, the hotel’s guiding principle is all about mindfulness, and this is found in every detail—Latvian artist Katrīna Neiburga’s graphics hang on every wall in every room; the rooms are flooded with natural light, perfect for recalibrating the most jetlagged of travelers; and the smart bathrooms all have under-floor heating to warm up tired, aching feet. The building is also the only Art Nouveau building in Vecriga. Rooms begin at $130. Radisson Blu Latvija Conference & Spa Hotel (Elizabetes iela 55) is fan-favorite when it comes to the “hotel spa” experience in Riga. Home to ESPA Riga Spa, visitors can take a lap in the 18m indoor pool or bathe in the outdoor vitality pool, as well as access exclusive relaxation facilities like saunas, an ice fountain, and lifestyle showers. They even have heated benches to warm you up after a swim. In-house, you can also treat yourself to a wide selection of body, facial and nail treatments. Also, the bar is well known for its Skyline Bar on the 26th floor offering a panoramic look at Vecriga from a distance. Rooms begin at $80.

Wellton Riga Hotel & Spa (Vaļņu iela 49) is one of the newer 4-star options in the city, right in Vecriga, with contemporary rooms painted in an alternating beige and peach color palette. Your access to the the spa center is dependent on what type of room you book but if you decide to make the upgrade, you can enjoy the indoor pool, open all year long, jacuzzi, and sauna. Massage or hammam bath bookings can be made for an additional fee. Rooms begin at $61. The Naughty Squirrel Backpackers Hostel (Kaleju Iela 50) has been voted the #1 hostel in Riga 5 years in a row, bringing thrillseekers together with pub crawl excursions, bobsled tours in the winter, and cable car bungee jumping experiences in the summer. They also have a wealth of free amenities like lockers/locks, bedding, towels, and luggage storage. Dorm beds start at $16 a night/private rooms at $57 per night.

The Riga Old Town Hostel (Valnu Iela 43) is known for its legendary bar, but not much else. There is no common area and the sound carries from the bar to the rooms but if you’re a party animal, with drinks conveniently underneath your nose, there’s not much to complain about. Dorm beds start at $14 a night/private rooms at $45 per night.

WARNING: Do not expect a quiet night in at either properties and rooms book out fast so the minute you cement your Riga plans, the first thing you should book is your hostel room.

👉 Have you ever been to Riga, Latvia? Did you like it better than Estonia or Lithuania? Share your thoughts below. Millette Stambaugh is a Bay Area-based, Boston-bred Filipina who loves to vagabond. At 30, the former expat has traded in her nomadic ways for a semi-grounded life in San Jose, CA. A full-time digital marketer, part-time content creator, and aspiring destination wedding planner, Millette lives for good times, good food, and good peeps. Find out her #wheretonext on Instagram @thenextsomewhere. Digital marketer by day, content creator by night, Millette Stambaugh lives for good times and good people. She’s a Filipina-American by way of Boston and currently based in the Bay Area. From fairytale Balkan villages to the misty jungles of the Peruvian rainforest, her curiosity has taken her all over the world. With fifty countries under her belt, life is proving quite the adventure indeed. Where to next? Sheltering-in-place in San Jose, CA and planning a move to the Pacific Northwest in 2021.