Meet Emma McGowan, a bonafide digital nomad who writes for a number of consortiums including Bustle, Startups.co, KillerStartups, and MikKandi. She also has been featured on Mashable, The Daily Dot’s The Kernel, Mic, and The Bold Italic. She is also the Editor-in-Chief at the sex tech website Kink&Code. You can find her full portfolio over at emmamcgowan.com.

I first came across this one-girl revolution back in March, here in Saigon. Saigon was the latest in a string of overseas moves in her career as a freelance writer. She actually hops over to a new country every three to nine months. She is the only person I have ever met who lives solely off of writing efforts, an actual professional blogger. Confidence just exudes from every inch of her being and she radiates the type of boldness I only wish I had more of. Despite having had only a few interactions, Emma is a person I greatly admire for her ambition and for her willingness to help those along the way. Learn more about the sex positive feminist below. Hello my dear! So you’ve been to a lot of places… what’s the key to every successful trip?

What your go-to place for travel inspiration?

I don’t know that I go in for travel inspiration, TBH. I mean, I like looking at pretty pictures on Instagram, especially of places that I’ve already lived in — does that count?

When you’re on the road, basics aside, what are three things that have to come along with you?

MacBook Air, heart made from lack clay that my mom made, Kindle. What’s the best foreign word you know and why?

“Quilombo” is my absolute favorite word ever.

It’s from Argentine Spanish and the closest thing in English would be clusterfuck. It means like, a huge mess, and it’s kind of a soft curse word. “Que quilombo!” just rolls off the tongue so nicely!

What’s the most important skill you’ve learned on the road?

Spanish, hands down. I lived in Latin America for three years and while I’m grateful for many, many experiences from that time, learning how to speak Spanish is absolutely the biggest gift.

No-smudge red lipstick from Sephora. It keeps me feeling human even when I haven’t showered in 20 hours and my sleep schedule is jacked up.

Best curse word you know in another language.

Probably “wea,” just for its versatility. It’s a Chilean word that kind of means “shit” but also means “that thing,” so you can point to something you don’t know the name of and say “Esa wea!” (“That shit!”) and it always works!

What was a memorable first abroad?

I hiked a dormant volcano and spent the night watching the ACTIVE volcano right next door erupt and spew lava into the sky. 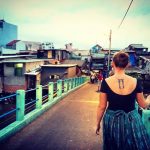 Back alleys of Saigon 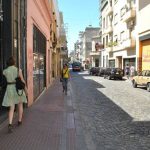 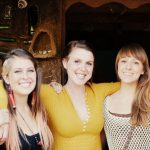 Outside my mud house blowing in the wind in Eco Village, Chile 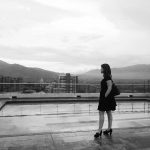 Rooftop of our place in Medellin, Colombia 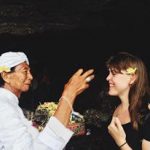 Blessings on my travels 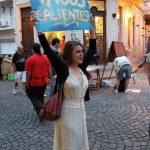 
You have just won a trip around the world! List twelve cities on your flight path.

My boyfriend, Ben. We’ve been traveling together, moving to a new country every three to nine months, for over three years now. The zen shrine in Kyoto with Ben

How do you cheer yourself up on a bad day?

Leave the house! I have a bad habit of working from home day after day because it’s just easier than going to a cafe. I do it even though I know that if I spend too much time in the house, I get grumpy. So I go out and remind myself why I love the place I’m living. For example, today I saw a giant construction truck trying to turn a corner here in Saigon but a massive bundle of electric lines were hanging over the road, impeding it. A dude climbed up on top of the truck, lifted the power lines with his arms, and walked toward the back of the truck as it moved forward, allowing it turn the corner without taking out power for the whole damn neighborhood. It was such a classic Saigon moment that I would have missed if I hadn’t left the house.

If you were exiled to one country for the rest of your life, where would it be?

Guatemala. I love that country so much. I could (and did) just spend days looking at the textiles and the mountains and the lake. The food is kind of “meh” but you can get groceries for cheap and I do like to cook. What is the oddest thing you’ve ever done?

This blog is G-rated, right? I’ll have to pass.

Be sure to check out her personal portfolio and read her featured works. 20 Female Travel Bloggers of Color You Should Be Following